The Liskes in SoCal: The Announcement

Cam & I got married 14.5 years ago- I can’t believe it has been that long! For our honeymoon, we went to Disneyworld in Florida. That trip combined two of my greatest loves: Cam and Disney. We went to every Disney park, soaking up every magical moment. From that very first trip, we have been dreaming about the day when we could go back with our own children. The very thought of their excited and astounded faces walking through Disney brought me to tears- on MANY occasions through the years!

This past wedding/family season was a very busy time for Courtney Liske Photography. Cam & I are so thankful for the clients we got to capture memories for in 2018. In the midst of our busy season, Cam asked me, “What if we planned a trip to get away and refresh as a family?” The thought of a trip is always exciting, but my mind always questions- is the timing right? How much will it cost? And on  I fell down the responsible-minded rabbit hole… Then Cam shocked my socks off when he said, “What if this was the year we could take our kids to Disney? I ran the numbers, and I think we can make it work.” Y’all, I nearly PEED my pants! (Yes, my wannabe Southern accent comes out when I’m excited!) I cannot express to you the tears of joy and excitement that flowed right from my heart that day. The dream we’ve shared for our family for the last 14.5 years had become a possibility.

In September we started having ‘date nights’ each night after the kids went to bed. Not ‘date’ in a traditional sense, but for our preparation obsessed Disney-loving hearts, they were perfection. These nights consisted of each of us on a laptop. I was searching for accommodation and car rental. Cam booked theme park tickets. We read every tip possible on gluten-free dining in each park. The hidden gems that people generally pass by- and really just Disney anything. Inevitably at some point, we’d lock eyes, and would both burst into tears of pure excitement. We decided to go to California to explore Disneyland and California Adventure, and ‘break them in gently’ to what a Disney trip looks like. Cam & I made the decision to keep this trip a secret- not only from our kids but from everyone. The risk of someone accidentally telling the kids wasn’t one we wanted to take!

Our flurry of planning came together quickly, and then we waited. I want to say patiently, but that’d be a big fat lie. My inner child was going BANANAS with each passing day. One night at supper, we talked about where we would travel if we could go anywhere in the world. Hayden said she’d go to California because ‘it looks like a pretty nice place’. Judah wanted to travel to Disneyland to meet Lightning McQueen. Ashton wanted to go back to Australia (we went when he was 6). Hey, 2 out of 3 ain’t bad! I wanted to start packing in the fall, but first, we were taking a trip to the ShowIt United conference in early November. The deal was that I couldn’t start packing until we got back from Arizona. Less than 12 hours after arriving home, all of our laundry was done, the kids’ suitcase was packed and waiting under our bed!

Cam & I went back and forth on how we were going to tell the kids. Our original plan was to just wake them up that morning, and tell them we were taking a trip. We were hoping that we could get through security, and then break it to them at the airport. The wrench in this plan was that we had a 5:00 AM flight, so we needed to give them a reason to be up (and cooperative) at 3:00 AM… AND hope that none of the ticket agents or security people gave our final destination away. So we hatched a plan that we hoped their 10, 7, and 4-year-old minds would still be surprised by!

The kids arrived home after school on November 27, just like any other day. After the regular debrief of the school day, we asked them to sit together on the couch in the living room. We’d previously talked about how this Christmas was going to be different and asked if they remembered why. Hayden reminded everyone that this year, our family was doing more experiential things together rather than them receiving material gifts. Cam told the kids there was one small gift that we wanted them to open that day. He asked if that would be okay with them, and was greeted with cheers and excited smiling faces. Each of them opened a package that contained: Mickey or Minnie Mouse ears, a box of Bertie Bott’s Every Flavour Beans, a Lego figurine, and a 90th anniversary Mickey Mouse Kinder Surprise. They opened their gifts with excitement and politely thanked us, but didn’t otherwise react. Judah’s immediate reaction was to find out how soon he could open his candy.

It was a good thing we’d talked it through and knew we needed something to really solidify what was happening. Otherwise, they weren’t going to catch on. We handed the boys each a card that read, “Keep calm we are going to DISNEY“. Hayden got a card that read, “I can’t keep calm I am going to DISNEYLAND!“. As the cards were read aloud, screams of disbelief and tears of excitement filled the room- including Cam & me. We explained that we were leaving the next morning to head to California. While we were there, we would be going to Disneyland, Legoland, AND Universal Studios. The boys continued shouting in disbelief and Hayden cried even harder with excitement- she is much like her mama in that regard!

The moment we had waited and prayed so long for had finally come! It felt surreal in so many ways to finally say those words to our kids. Our southern California adventure was about to begin- in less than 12 hours!

P.S. Yes, we are professional photographers, and the pictures we have of that day are just a few iPhone photos! The best kind of camera is the one you have on you. Honestly, we were too excited (and used our cameras to take videos of the kids’ reaction)!! More photos to come, I promise. ;) Instead, I’ve included a couple of our Disney honeymoon photos instead- you’re welcome. :)

And before anyone asks, yes, our duvet cover has Star Destroyers and TIE fighters on it. We’re cool like that! ;)

{ The Liskes in SoCal: The Announcement } 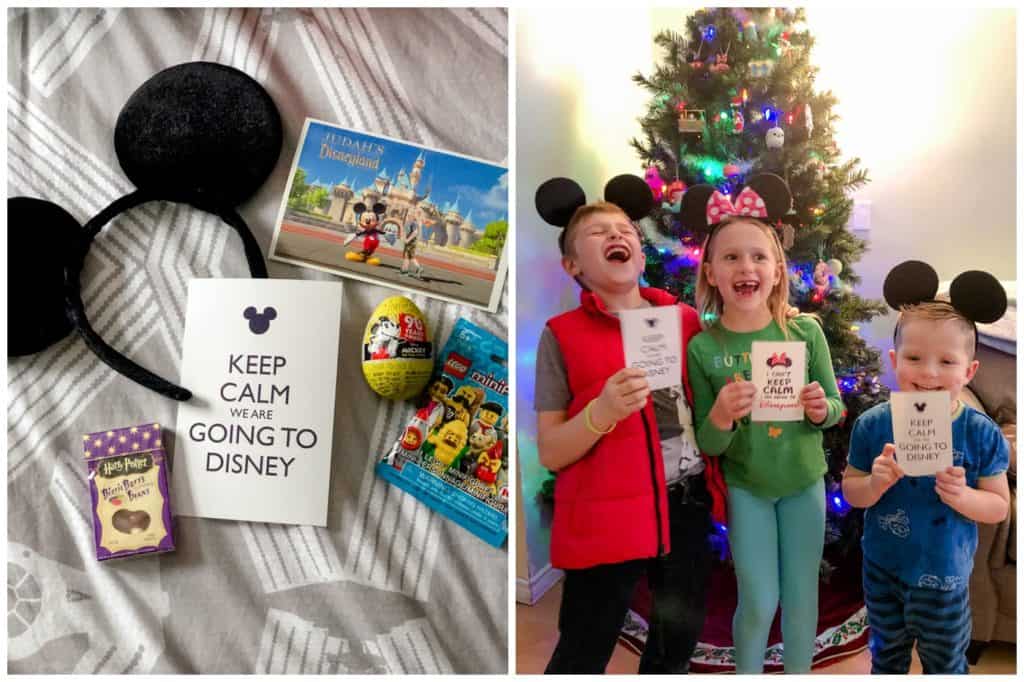