The Liskes in SoCal: Legoland

{ The Liskes in SoCal: Legoland Day One }

Our first stop on the Liske SoCal adventure was Legoland California. Morning came, and the kids eagerly flung open the hotel window curtain, to reveal puddles on the ground and a grey sky overhead. Though it was not what we hoped for, we were determined not to let the rain spoil our day! We stopped in at Target to grab everyone some rain jackets and away we went!

We have a slight obsession with Lego in our household- all three children and Cam. Needless to say, the trip down Legoland Drive was an exciting one. The chatter from the back of the van grew louder the closer that we got to the parking lot. Squeals of joy reached their loudest when they saw the brightly coloured bricks of Legoland Hotel, where we would be staying! Everyone jumped out, donned their rain gear and took off toward the gate!

You can’t take more than 10 steps at Legoland without seeing something made of Lego. Go figure, right? One of our favourite parts showcased elaborate miniature scenes of American landmarks. The New York cityscape was a favourite, which included a subway that moves underground. It amazed me to see elements of Christmas incorporated into every miniature scene. There were sleighs & reindeer on the roofs, wreaths, Christmas lights and Santa- who we even spotted bull riding in one scene!

Each Legoland employee wears a name tag and has a mini-figure stuck on it. Legoland encourages people to bring a mini-figure with them to the park, so you can trade with the staff. This was a really fun activity for the kids to do as we walked through the park. Hayden traded the most and found so many new and unique characters along the way! 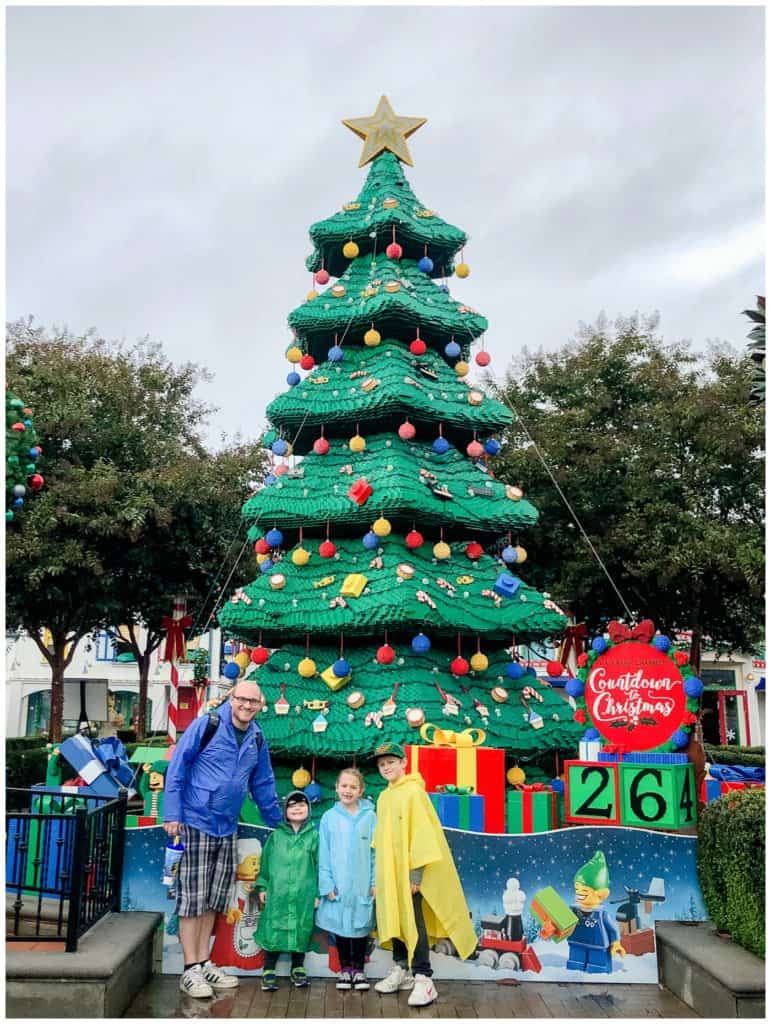 Our family loves Lego, but we love Star Wars even more! So imagine the excitement of combining those two elements. That is what is called a ‘geek mind explosion.’ There is an entire section of miniature Lego scenes built representing each Star Wars movie. The kids ran from scene to scene, rapidly snapping pictures. My favourite is the scene from Hoth. The AT-AT walker looks like a parent at the end of a very long day. 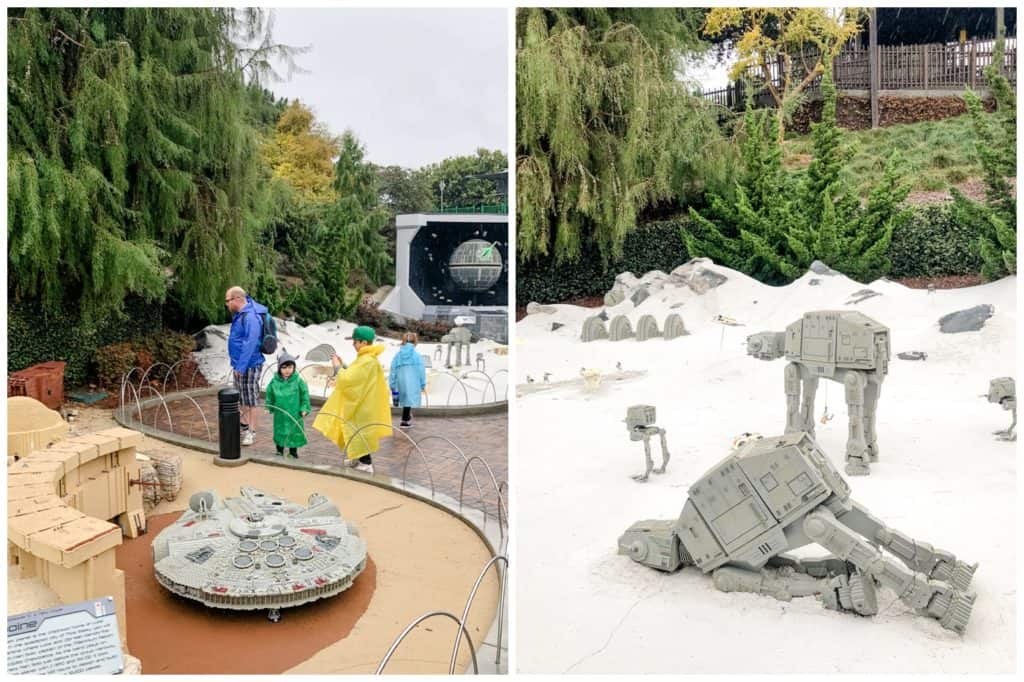 Hayden’s favourite part was visiting Heartlake City, where the Lego Friends live. We were able to take a spin on Mia’s Riding Camp merry-go-round, which even the boys enjoyed (but won’t admit). Hayden was so excited that we saw the Lego Friends perform a show and afterward she got to meet them! She was in her element in the brightly decorated square. So much so that she even took a moment to stop and smell the oversized (plastic) flowers. 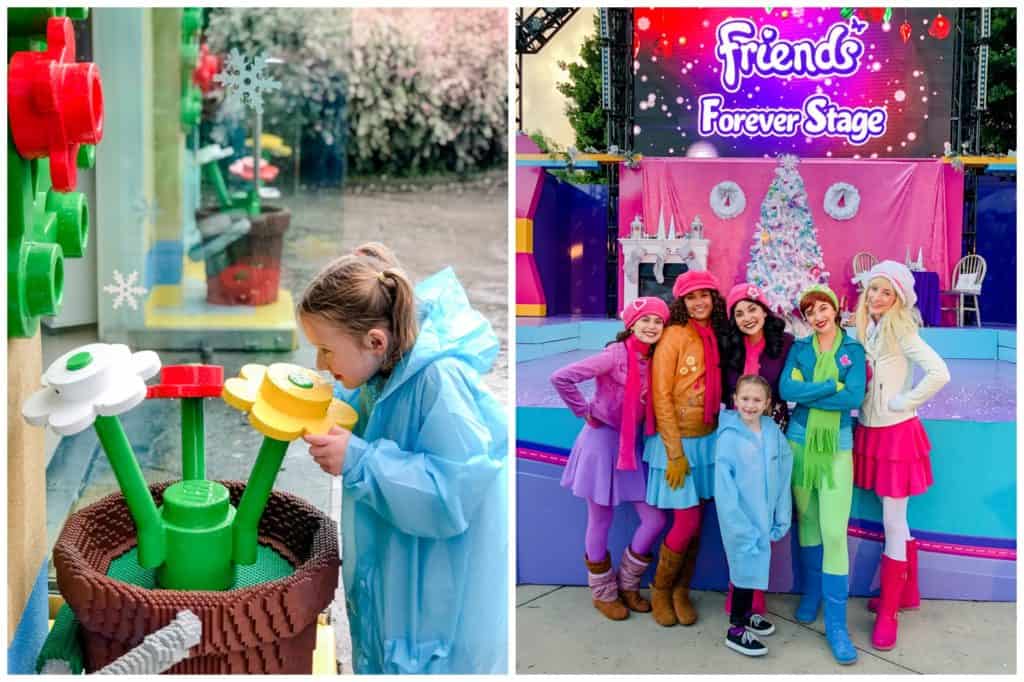 Not all of the rides were open (on account of the rain) but we had so much fun on the rides we did go on. Our youngest, Judah, impressed me so much. He is four, but went on every single ride that he was tall enough for, which included his first roller coaster! Legoland has done such a great job at making it accessible for most ages! Despite the rain, our first day at Legoland California was an awesome one! 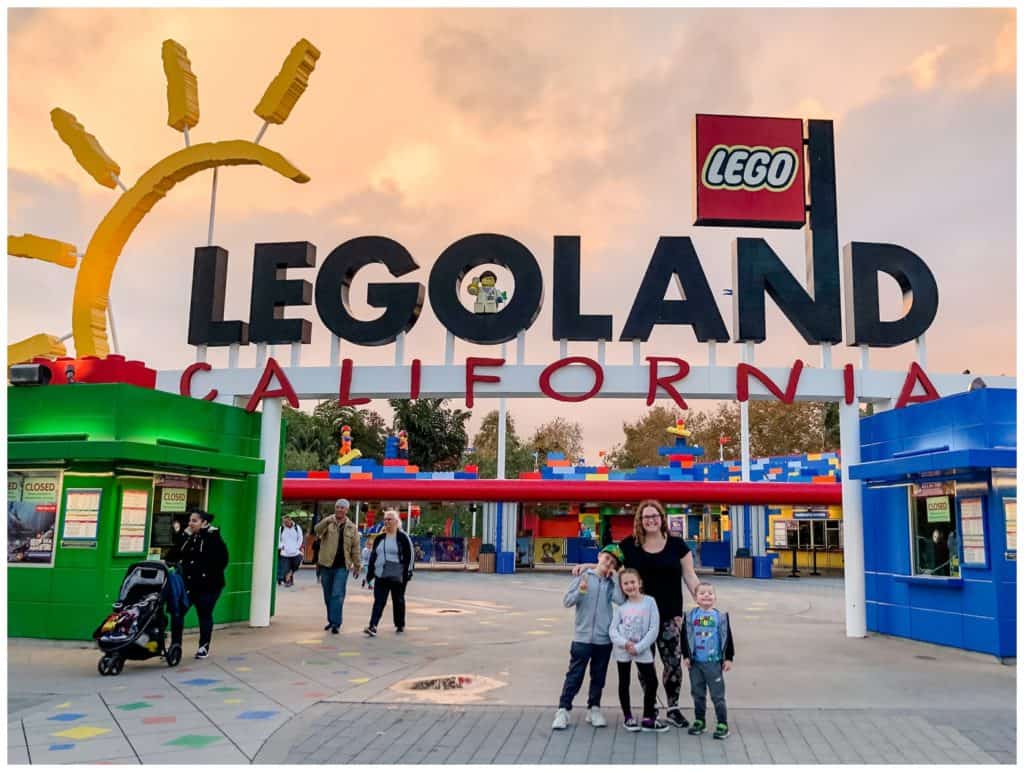 We stayed at the Legoland Hotel that night, and it was our first ever themed hotel stay so we were all pumped! The hotel lobby greets you with a huge pirate ship. There was a large pit of Lego that the kids could play in where they had to take off their shoes. Children walking around stepping on piles of Lego? It was kind of like the ultimate parent revenge! *Insert evil laughter here…* We had supper and breakfast the next day at Bricks Family Restaurant- some of the most incredible buffet food I’ve ever had. There were so many gluten-free options at the buffet- which we usually struggle with. We were BLOWN AWAY by the food and service at Bricks!! 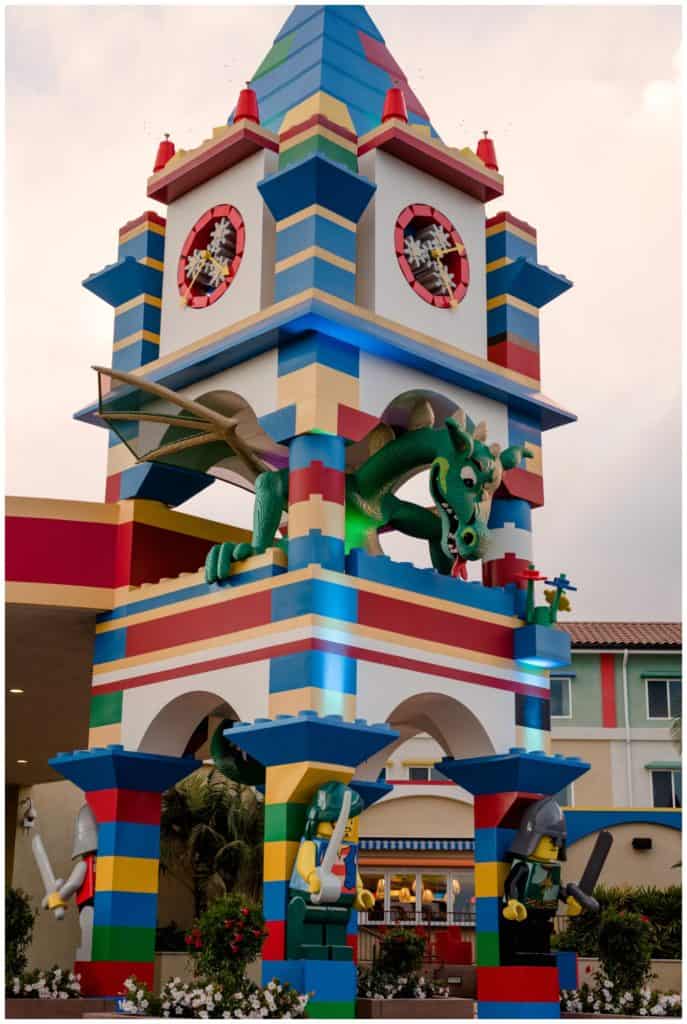 Our room was Adventure themed and included a bunk bed with a trundle, essentially a 3 person bunkbed! Thank you, Legoland! There was a safe in our room that held a prize for each child. To get the combination, the kids did a scavenger hunt through the hotel lobby to find the numbers. After dinner, we wandered into a dance party that our kids LOVED. Even Judah smiled a few times, which is rare. They played games, where the kids would freeze or dance in slow motion. My favourite was the “Starfish” game. Whenever the DJ yelled “Starfish!” kids would stop dancing and hit the floor like a starfish. Our kids were ALL IN with this game. Where bodily harm was disregarded, as long as they were NOT the last one standing. We have a video of Judah’s head legitimately bouncing off the floor as he collapsed into starfish position… My insanely competitive heart could not have been more proud!

The sun came out for day two at Legoland! We started the morning with a swim in the pool. It was only 16 degrees Celsius so we had the pool to all ourselves. No joke- the lifeguards wore slightly less insulated ski pants sitting in their guard chairs! As the Canadians were all in our bathing suits in the pool…

Even the pool had giant foam Lego blocks to play with! The kids attempted to make a floating pool chair but it didn’t quite turn out as they hoped… 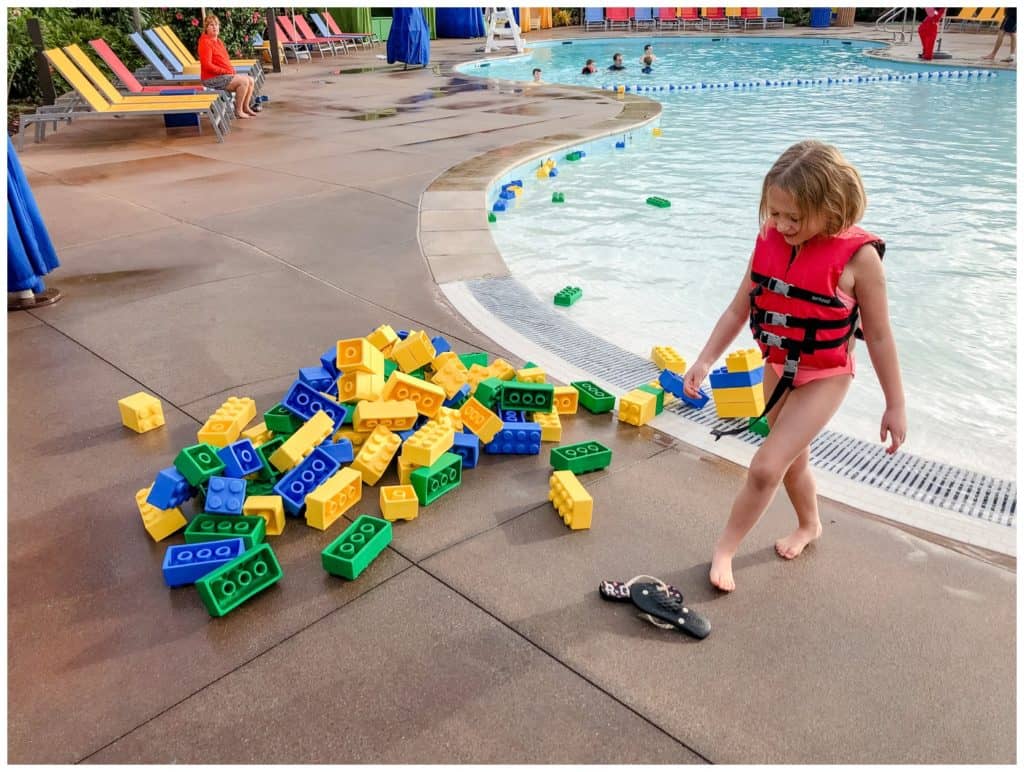 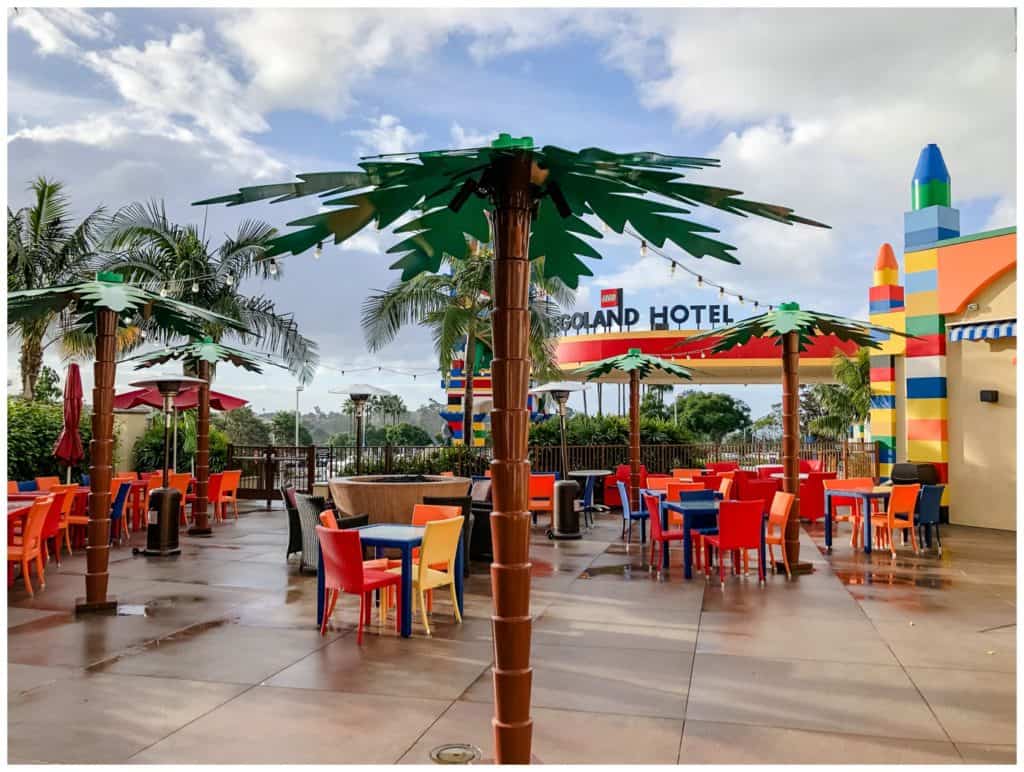 Less rain on day two meant that more rides were open on the second day. We had the chance to do our favourites from the first day and try out some new ones! One of Ashton & Hayden’s favourites was the Kid Power Tower. The aim is to pull yourself up (with some assistance) in a race to see who reaches the top fastest. Judah’s favourite ride was the Junior Driving School, where he prides himself on his amazing driving. (He even got a ‘drivings license’ to prove it.) Other kids got stuck on the side of the track or couldn’t figure it out, as Judah was weaving in between them. The second picture pretty much accurately depicts his feelings about the other kids on the ride. “So how many laps did you do? Really? Stuck again?”  Judah was great with the Lego car, but his skills with the Lego boat were not as great. Staff intervention was almost required to get us turned in the right direction! 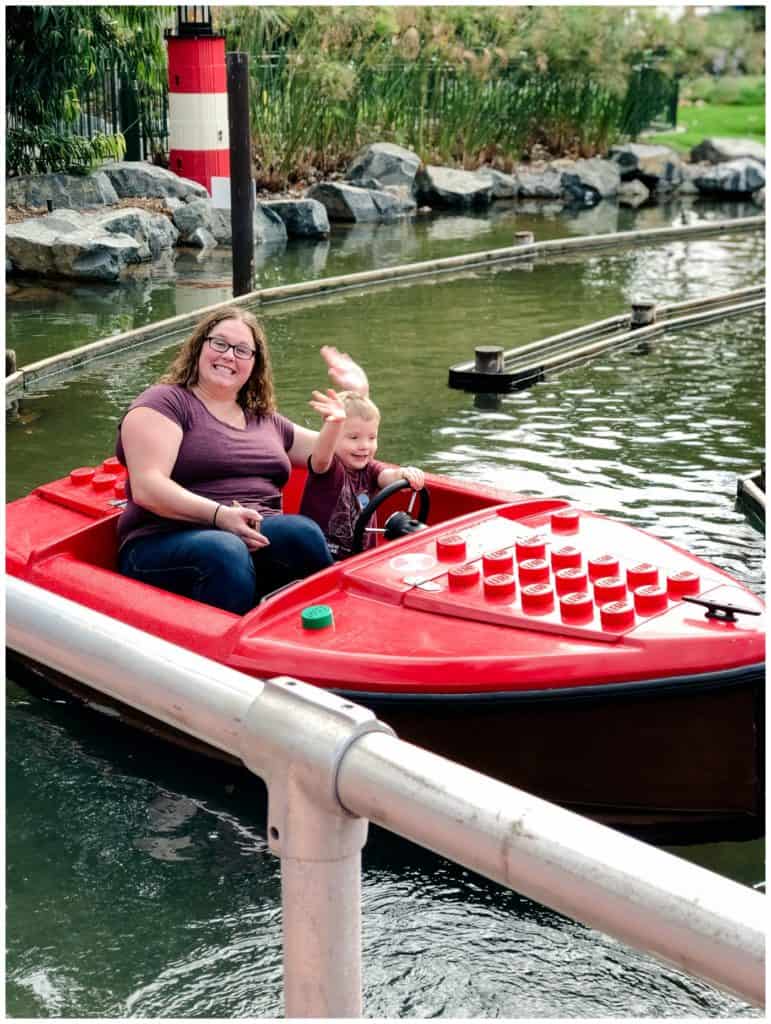 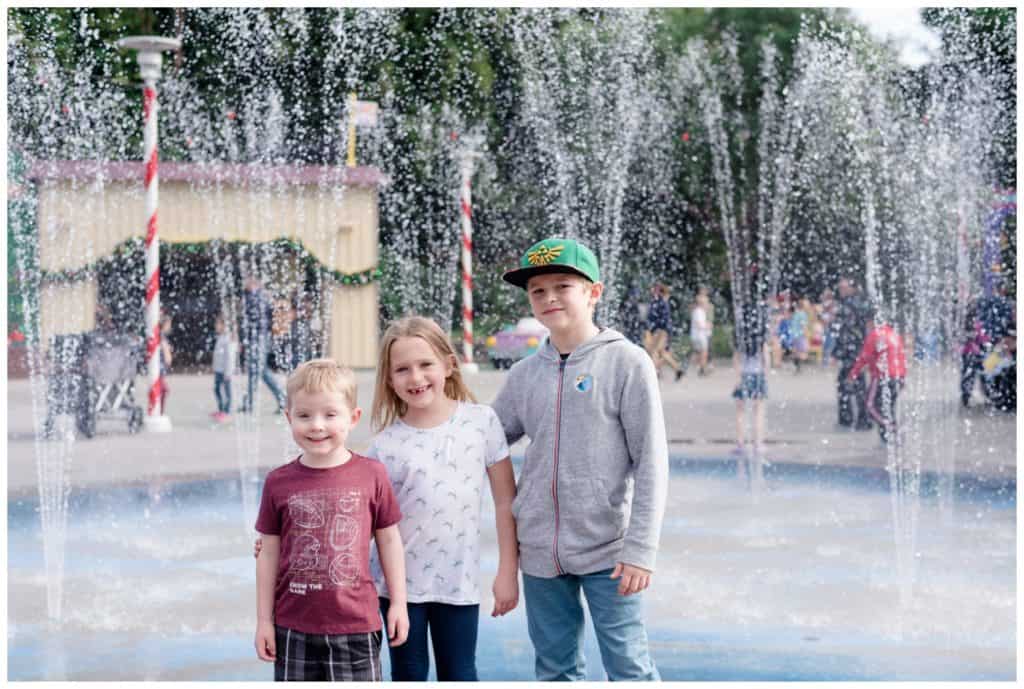 After we finished going through the park a second time, we moved indoors to the Sea Life Aquarium. We learned all about jellyfish, anemones, sharks, rays and many other types of fish! The kids even got to touch some of the (non-stinging) anemones and starfish, after some convincing. We wrapped up our time with a “quick” stop in the gift shop for souvenirs, and hit the road back to LA for our next adventure: Disneyland!